I’m often surprised by my occasional creations. I have some idea in my head but I’m never quite sure how they will appear. Mostly pleasant, some failures. And then these creatures started to appear… from somewhere… They disturbed me and shocked me a little as they started to form. I wasn’t sure where they had come from. Surely not my head!!! I started to worry about what I had found.

Then the reaction from other people: you could see they weren’t sure what they thought of them. Somewhere between fairy tale and nightmare. A silence.. and then the questions.

I found them very difficult to photograph. I think they look much more dramatic in reality. 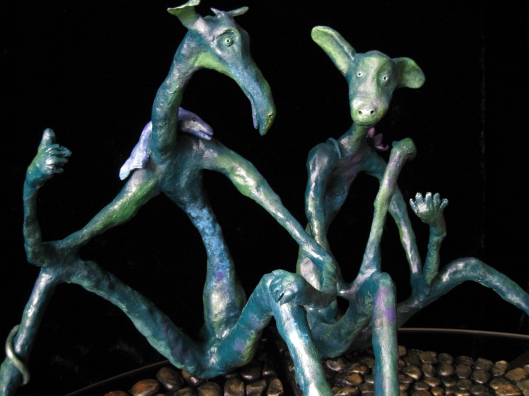 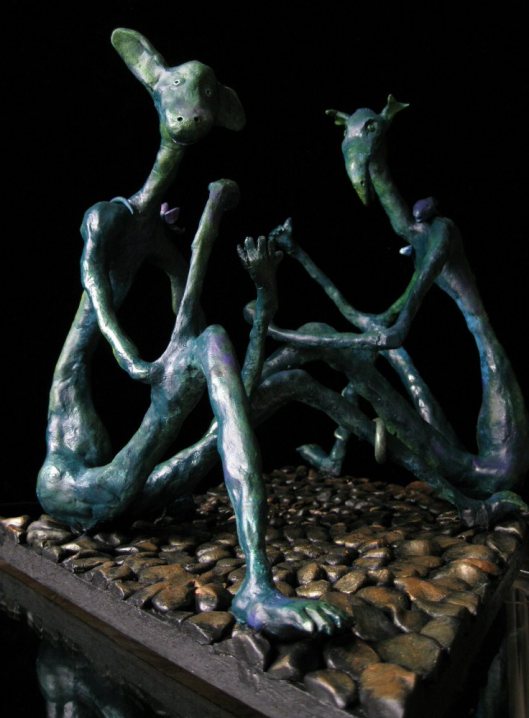 The bases are triangular so the picture they paint changes depending on their relationship to each other; both facing you (waiting for you to say something), facing each other (story telling), facing away from each other (contemplative, or perhaps not wanting to listen to each other).

I like the bases. They look like rings of stone. A small magical circle for them to sit inside.

I started them using wire and wood formers, then adding clay, the heads appearing last and unexpectedly. They are around 400mm tall.

Colouring was difficult. I intended black first so you would look at the shapes and not be distracted by any colour. That was too dramatic and they looked very dark in so many ways. I painted one orange. No. Then I tried greens, blues, purples and I decided to stop (so difficult to know when to stop with any art). 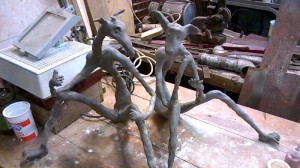 I have been through a few names for them but in the end I decided to leave that to the viewer :o)